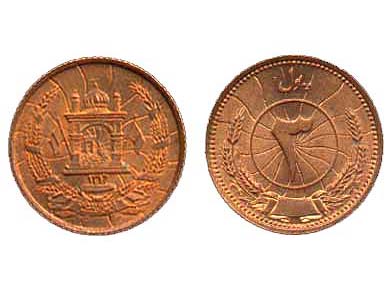 Just prior to World War II, the Germans set out to establish new alliances with a variety of countries, especially those middle – Eastern nations that could supply strategic materials for the war. Mohammad Zahir Shah came to power in Afghanistan the same year as Hitler ( 1933 ) and a close relationship developed between the 2 countries; So much so, that Germany now began offering many services to Afghanistan, such as the minting of its coins.
In 1937 the first all bronze 3 Pul coins were minted in Berlin. These were flown from Germany to Kabul Airport, by the only commercial company using those facilities, namely, Lufthansa DLH (from the merger of Deutscher Aero Lloyd and Junkers Luftverkehr), using Junkers Ju 52/3m .

At the outbreak of the War in 1939, Afghanistan was pressured to break its ties with the Germans and coin production in Germany ceased. These 3 Pul coins dated 1937 are all in uncirculated condition, with some tarnish.