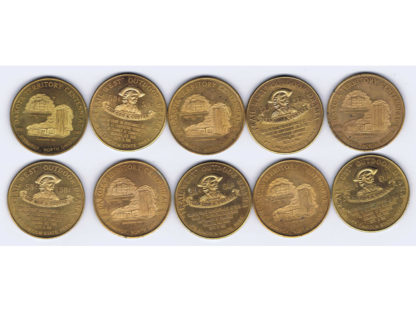 Before the explorers, trappers, fur traders etc. came into what is now North Dakota, nine tribes inhabited the region: Arikara, Assiniboine, Cheyenne, Chippewa, Cree, Hidatsa, Lakota (also know as Dakota Sioux), Mandan and Yanktonai. Among the first Europeans to visit the area was Sieur de la Verendrye (1738), when the French claimed the land for themselves. But in 1803 the newly formed American nation, under the guidance of Thomas Jefferson, bought the entire swath of land extending down to the Gulf of Mexico in what was to be called the ‘Louisiana Purchase’.

The following year President Jefferson sent Meriwether Lewis and William Clark to explore the territory. They were followed by the notable Prussian Prince, Alexander Philipp Maximilian and his companion the painter Karl Bodmer.

The Dakota Territory was established by Congress on March 3, 1861 – it consisted of what is today the states of North & South Dakota, most of Montana and Wyoming. During the next 10 years, the American Military built many forts to protect, settlers, westward expansionists, railroad workers and to control the Native Americans.

On June 25, 1876, from Fort Abraham Lincoln, General George A. Custer lead the attack on Chief Sitting Bull which ended in his complete defeat (along with all 209 of his men) at the Battle of Little Big Horn.

In 1889, N. Dakota achieved Statehood and prior to that many settlers came in to get free homestead land for farming (mostly wheat) and cattle raising.

Even the future President, Theodore Roosevelt bought his first ranch, the Maltese Cross, in North Dakota and spent several months each year there.

This special 50 cents ‘money’ medallion was issued in 1961 (100th Anniversary of the territory) and depicts the Capital in 1883 and the State Capitol in 1934 (both in Bismark) along with a portrait of Custer. This lot contains 10 of these medals in unused condition with a bit of oxidation. 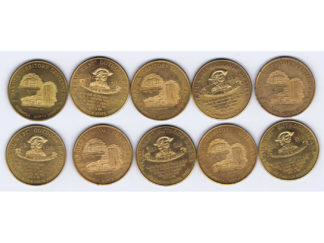