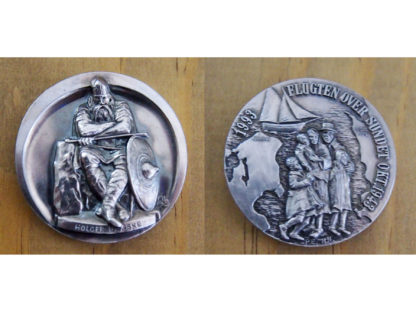 Presented here is a high relief silver medal (approximately 1.5 oz or 45 grams / measuring 1.6″ or 4 cms = .925 Silver) commemorating the 50th Anniversary of the escape of the Danish Jewish community from the clutches of Nazism during the second World War. Created by Danish artist, engraver and medallist, Brent Jensen, this piece features a reverse of Holger Danske (Holger the Dane – National hero) and an obverse showing the Jews between the maps of Denmark and Sweden.

Here is this amazing story ………

From the first day of Denmark’s occupation by the Nazis (April 9, 1940) and for more than 3 years thereafter the Danes stood vigilant guard over their Jewish population (including Jewish refugees from Germany, Poland, Czechoslovakia etc) and their property.

By the autumn of 1943, in part due to overall Danish resistance to the Germans an immediate clamp-down was imposed which touched all aspects of Denmark, including of course its Jewish population. But as soon as this occurred the word spread by the citizenry, organizations, and by the Jews themselves, and an overnight rescue sprang up that helped nearly 8,000 Jews escape to Sweden. Danish sea captains and common fishermen carried out this amazing operation. What began as a spontaneous popular movement quickly developed into an organized action by the Danish resistance movement. Out of this escape action a steady flow of illegal traffic grew between Denmark and Sweden, and Jews in both countries organized it and kept it in the money. This traffic continued until the end of the war and provided the Danish underground with a constant line of communication with the Allies. 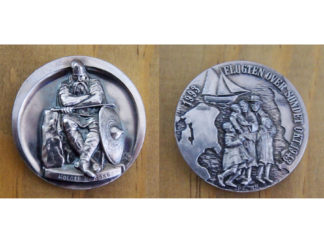