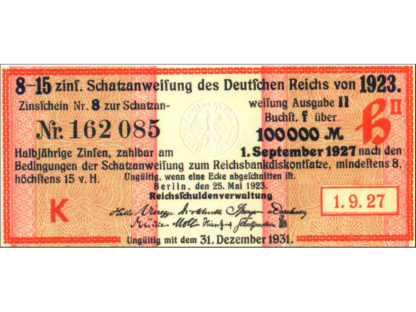 1923 was significant for the German Weimar Republic: for one thing it was the year the Adolph Hitler failed in his first coup d’etat, and was subsequently captured and imprisoned. It was also the time when Belgian and French troops marched into the Ruhr to enforce German reparations. And it was in that year that Willy Messerschmitt started his airplane factory.

Here is the German State Bond ‘coupons’ that were to be redeemed as the pay – off for many important projects. Issued in Berlin, which at the time was Europe’s most populous city, these bond coupons featured a floating interest rate of between 8 and 15 % and are dated for redemption between 1924 and 1927.

One of the most attractive features of these coupons is the magnificently embossed ( muted ) Teutonic eagle symbol that appears in the center ( which can be easily seen and felt ). 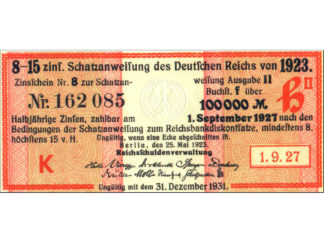