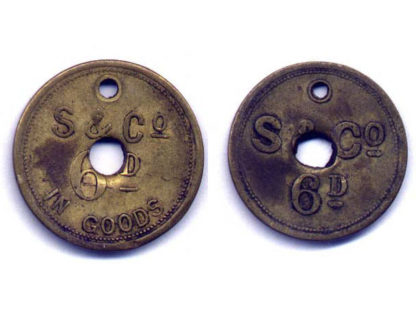 Here are cancelled (redeemed by punching a hole thru the center – the other hole was for stringing the pieces, as pockets were not the rage amongst many natives) rare store tokens from Transkei all from the pre – decimal days. It is most unusual to find any store tokens from Africa,  and this one from this out of the way small town of Umzimkulu in the homeland of Transkei, is very special.

These 6d ( sixpence ) brass store tokens are from Strachan & Company and offered in well used condition ( similar to the picture ) as two different types, one that says ‘ IN GOODS ‘ (meaning that it was redeemable in goods, both sides show the same design) and the other without those words and presumed to be older (but still it was redeemable, and is uniface or one sided).

Transkei, former Bantustan, or black homeland, in South Africa, was one of ten
territories assigned to the black majority population in the 1950’s as part of
South Africa’s policy of apartheid, or racial segregation.

Transkei ( homeland of the Xhosa speaking people those whose consonants are clicks ) consisted of three
fragments of land covering about 40,000 square kilometers ( 15,000 square miles ).
Umtata was its capital. About 3 million people were defined as Transkei citizens. 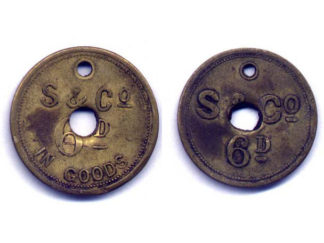