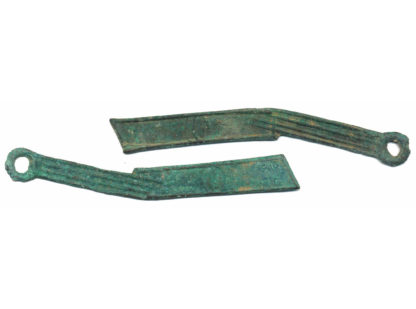 Although the exact date when the Chou Dynasty was established is vague,
none the less the Chous were in full power by the 9th Century B.C.
With the added dynastic economic growth a need for money outside of a mere
barter system began to develop. The early coins were fashioned to look
like the ancient barter instruments the community

used previously for trading. The practice of casting stylized coins out of copper
began during this time, permitting the Chou to grow considerably.

Included in this development of money, were inscriptions of various types,
mostly referring to weights, values and location of origin.

( 13 centimeters ) long each bearing a hole for easy handling in quantity.
These are from the City of Ming in the State of Chao. 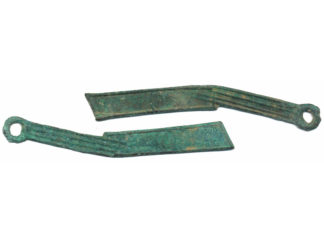