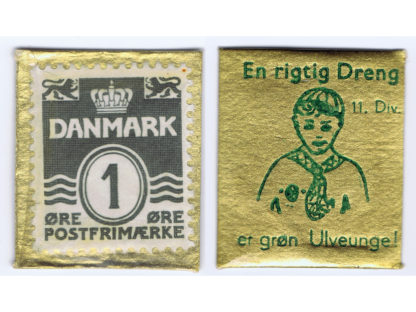 At the outset World War II ( 1939 ) Denmark issued a declaration of neutrality, but within several months German troops crossed their border, and after some resistance the Danish government submitted to a military occupation by the Nazis. Almost immediately, copper ( and its related alloys ) became hot commodities for use by the German war machine. In Denmark, all the minor bronze coins ( eg 1, 2 & 5 Ore ) quickly disappeared from circulation. Finally, in February of 1941 an aluminum version for the 2 & 5 Ore coins was issued, but nothing to take the place of the very popular 1 Ore pieces. During May it was announced that several commercial organizations, as well as civic authorities began to issue encased ( in cellophane ) 1 Ore stamps as monetary substitutes, using the reverse for their own advertising. Within several months many Danish organizations were doing the same. By September of that same year ( when a new aluminum 1 Ore coin was finally introduced ) more than 8 million such pieces were already in circulation. Presented here is the 1 Ore money substitute featuring the Boy Scouts ( technically Wolf – Scouts, 11th Division of Copenhagen ) of Denmark, the true resistance leaders, as any fight against the Nazi aggressors ‘must begin with the youth of the nation’ made by Danatex.