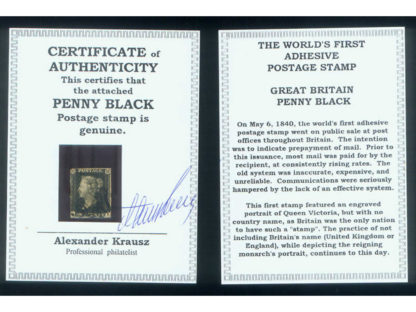 On May 6th 1840, the world’s first adhesive postage stamp went on public sale at post offices through-out Britain. The intention was to indicate pre-payment of mail. Prior to this, most mail was paid for by the recipient. The old system was in no way accurate, inexpensive or reliable. Communications, were seriously hampered by the lack of an effective system.

Each of these genuine ( 2 or less margins, with possible faults ) stamps comes with a hand signed Certificate. Created for a mail order catalog 15-20 years ago.

Both houses of Parliament were against the idea as they had the ‘free franking” privilege. So popular was this innovative idea, that within 40 years of introduction, the system had spread to more than 150 other Countries.

Printed in sheets of 240 ( 12 across x 20 down ) Before the decimalization of the English currency, one row of 12 stamps equaled a shilling and 240 One Penny stamps made an old £ ( see below for lettering details ). Since its very first stamp, Britain has always been the only Country in the World, not to feature its name on postage stamps, just a picture of the reigning monarch.

Communications had so improved by virtue of the Penny Black, that the letters carried by the end of 1840 had more than doubled from any single year period and within 10 years of 1840 the amount of mail skyrocketed. Many security devices were incorporated into this first stamp, to thwart potential forgers, such as the use of specially watermarked paper, an engine turned background, a super clear engraving of Queen Victoria and a lettering system that would identify each individual postage stamp on a sheet. Although the lettering is limited to a maximum of 12 across (meaning AA, AB, AC, AD, AE, AF, AG, AH, AI, AJ, AK & AL) and 20 down ( the above combination in BA, BB etc. all the way to the last row of TA, TB, TC, TD, TE, TF, TG, TH, TI, TJ, TK & TL). No two are exactly alike. 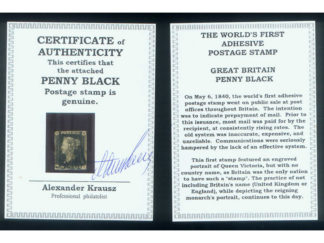