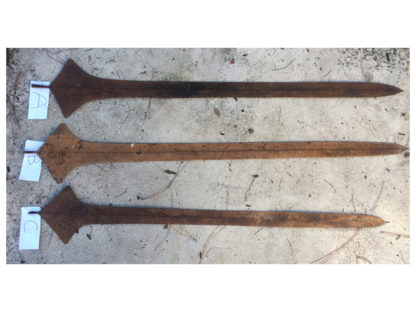 Before the introduction in Africa, of paper money and coins, in the 19th century, trade-currency was produced in several metallic forms. One of the most popular was the ‘Liganda Spear blades’ used by the Lokele and Turumba ( Kisangani region, between the Lomami and Lualaba Rivers, in what is today the Democratic Republic of Congo ) people. Besides the mere trade value of these spears which was, for example, 25 for a slave ( in 1865 ) or representing about 5 Shillings ( 1895 ), they were most often used as the ‘bride-price’ to be paid to the bride’s parents, as compensation for their loss of her valuable work services. Several lengths were popular ( the longer the spear, the more valuable it was considered to be ) including the triple dihunga which roughly equally the longer doah. In 1900, for about 50 doah, one could obtain a wife. This genuine example measures approximately 4 feet (1.2 meters) tall and weighs between 4 and 5 pounds (2-2.5 kilos), and are in relatively good condition considering its age with some nicks, cracks, holes, chinks, bends, broken tips, especially on the wings near the bottom etc. The bottom forms into an attractive curved hilt of about 7 to 10 inches ( 20-25 centimeters ) wide, forming into an elongated tubular end.

Besides being a measure of the families wealth, these long blades were sometimes (if the marriage was successful) re-made into those objects that the daughter could use such as a rake, hoe or cooking utensil. In the event that the marriage was a flop, the groom could give back the spears along with the woman. This offer is for a single, although there are several available. Our picture shows several basic designs, although similar. 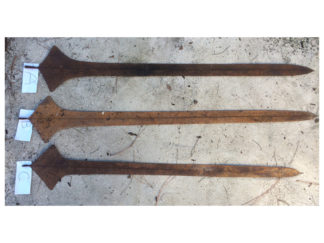